A "bootleg" commonly refers to a counterfeit game cartridge, CD or system.

NeoGeo bootlegs are quite common, as SNK took years to implement security measures to avoid (or at least delay) piracy. Most are believed to originate from China and South Korea.

Aside from the collection and authenticity aspect, bootlegs are known to be plagued with functional and electrical problems due to low quality manufacturing and/or poor design.

All pictures are crops from [MVS-Scans].

Efficiently recognizing bootlegs can be important for collectors, sellers and especially buyers. Some online sellers provide PCB pictures of their MVS games, but many of them only show the label or just an overall view of the cartridge (especially those for the home system, as they're more difficult to open).

Todo: how to open. MVS: easy, 4 screws. AES: snapped together.

This can be checked without opening the cartridge.

SNK had their favorite brands. If found on a cartridge PCB, these chip logos can be bad news:

From left to right, top to bottom:

Note that some original cartridges use EPROMs as P ROM revisions.

Memory chips only marked with a 3-digit number not matching the game's NGH number are certainly fake. 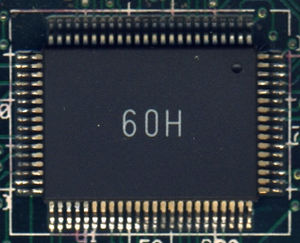 Some chips can be sanded (no markings, visible scratches...) to prevent other bootleggers from copying the design. Clone chips are often rebranded for the same reason.

SMT adapters are small PCBs commonly found in early bootlegs and converts. They allow the use of cheaper SMT flash chips in place of EPROMs without having to change the whole board's layout.

They were often assembled by hand and therefore covered in flux barf (see below). 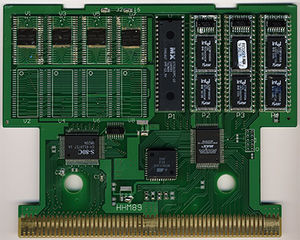 As some PCB manufacturers set their price depending on the board's area instead of the smallest containing rectangle, some bootleg PCBs were made in unusual shapes to reduce costs.

All known SNK boards use green. 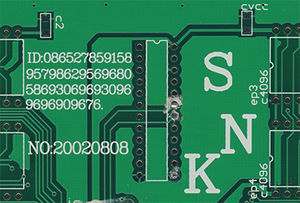 Are they even trying ?

Sometimes, nothing is better than something (even if no silkscreen at all also means bootleg). 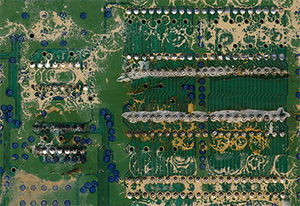 Extreme case of flux barf. Board could still be functional.

[Flux] used for manual soldering, when not cleaned off, can look like dried barf after a while.

Aside from eventual traces of accidental beer spills, rat piss and dust, original boards should be clean.