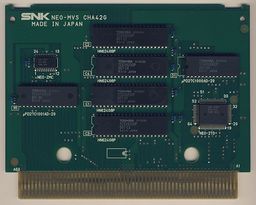 Can handle 4 2MiB or 1MiB C ROMs with a special trick.

This was done to benefit of the NEO-273's inverted A20 output on the A19 line instead to switch between pairs of 1MiB C ROMs without additionnal circuitry. However, this has the side-effect of mixing data up if 2MiB C ROMs are used:

For tiles to be used properly in 2MiB ROMs, data must be organized as follows:

In MAME, in the Fatal Fury 2 definition for example, the 4 2MiB C ROMs are loaded in a special order to sort them back out: