Difference between revisions of "Graphic glitches"

This is supposed to be a repair guide that doesn't need much technical knowledge on the graphics hardware to understand. Only cart systems are covered here. Pics are provided for all glitches described and can be used to compare with what shows up on faulty hardware.

A dead LO ROM or its associated buffer can cause sprite rows to be replicated along their height. The fix layer (most text) isn't affected.

Thanks to GadgetUK164 for the info. 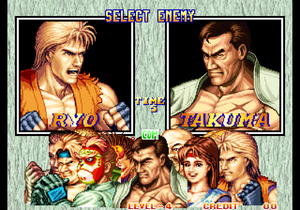 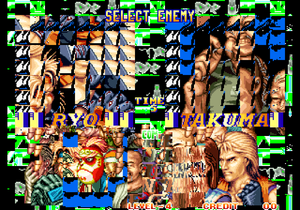 Higher address lines can cause the 16x16 blocks of sprite graphics to appear without glitches but in completely wrong places.

C ROM address A5 upwards can cause this. The patterns aren't obvious like they are for lower address lines so it's not as easy to diagnose. Graphics from different stages, characters etc. can show up correctly but are misplaced.

They can't scroll or scale and they always appear on top of all sprites. This can cause S ROM issues to completely cover the screen. 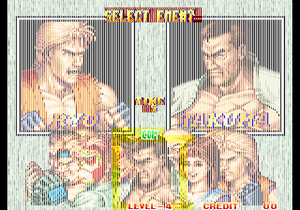 Data outputs from the S ROM go through FIXD0~FIXD7 on the cart slot.

If any one of these traces is bad then it can cause glitches that cover the entire screen. A single bad output can cause every odd (or even) column of pixels on screen to be obscured.

Sprites below can appear fine correctly if some columns aren't affected.

Are caused by bad connections between video chips (LSPC2/B1...), not between the console and the cart.

Todo: fix isn't buffered so it shouldn't be affected by WE or CK lines cuts.