Difference between revisions of "Job meter" 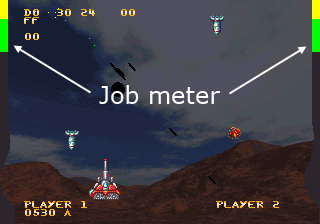 A job meter is a debugging or optimization tool which can be used to know how much time (or video lines) some of the CPU calculations take to execute.

This can be particularly useful to know if VRAM updates don't last longer than the vblank period, or to find what routines are causing slowdowns...

Job meters can be made by changing a palette value just before and just after execution of said code. Multiple routines can be timed by using multiple colors. More advanced job meters can also display values on the fix layer to indicate how buffers (ennemies, ammo, animation loops...) are filled.

Something as simple as this in the vblank subroutine can be used to monitor time usage by looking at the borders of the screen:

As long as there's no red lines reaching the top of the active display, the code is guaranteed to run fast enough to avoid tearing.