Difference between revisions of "NEO-273"

The NEO-273 chip is used in cartridges to demultiplex the P bus to C ROM and S ROM addresses (graphics). Ir replaces the discrete 74LS273 and 74LS174 latches that were used in early boards (like CHA-32).

This chip was later superseded by NEO-CMC which performs the same functions along with a lot of other things.

For cartridges that use this chip but have more than 8MiB of sprite graphics data, extra bits were added using discrete chips. An added 74LS74 (2 bits) in CHA256 boards for example increases the C ROM capacity from 8MiB to 32MiB (256Mbits).

Mapping of the P bus to the ROM address lines:

Note that A4 (CA4) of the C ROMs and A3 (2H1) of the S ROM are not part of the P bus and come straight from the cartridge edge, bypassing this chip.

P20~23 are left out or routed to additional latches if needed.

An inverted C_A20 signal is available on pin 47 to allow cartridges which use 2MiB C ROMs to switch between 2 pairs without the need for an additional inverter chip. 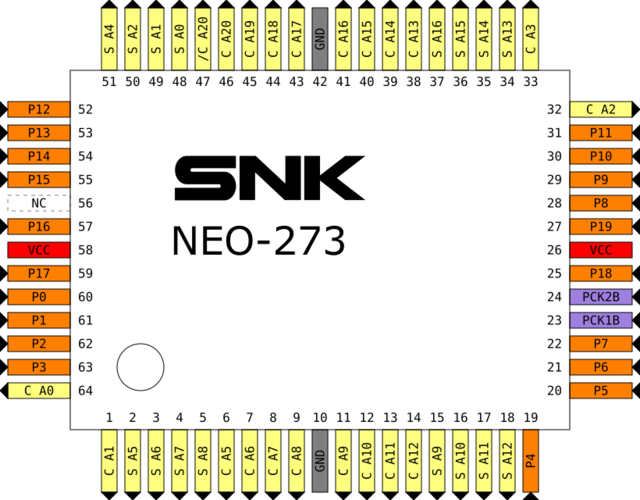