Difference between revisions of "PROGBK1"

The only non-protected board that can bankswitch and use all V ROM space. Really common and very useful for homebrew stuff or converts.

Often used as the PROG board in Neo Print cartridges. 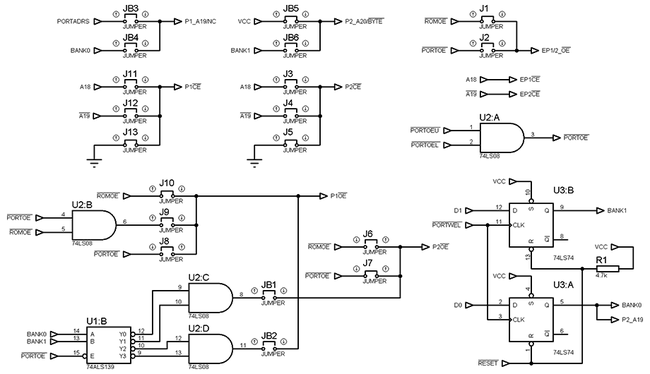 Bankswitching is done with the LS74. It's not needed if the game isn't banked. Any write to an odd address in the 0x200000~0x2FFFFF range will set the bank.

A 4Mbit ROM can also be used, but only if there's one and only if it's in the last used slot.

The size of the largest V ROM is selected with a pair of jumpers on 6 spots (3 possible choices).

This pair of V ROM jumpers effectively choose a set of 2 of the PCM chip address outputs to input to the LS139, which will enable one out of the 4 V ROMs at a time.