Difference between revisions of "Repair help"

Smoke and other visible clues 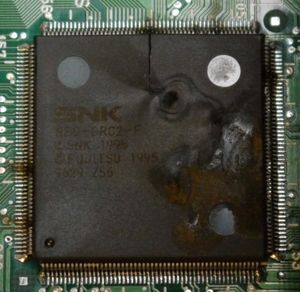 If a chip looks like the moon's surface, it can only be bad news. Here NEO-GRC2-F on a MV1B, which fried under 12V.

On NeoGeo systems, burnt chips are often a sign that the 5V rail went way higher than 5V, probably because of a cab or supergun power supply failure, 12V short, or a reverse connection of the JAMMA connector. Several chips are usually killed in that case, but all may not show visible damage.

Some chips may have survived on the board. May have.

Internal chip damage is more common, and can't be detected visually. Voltage spikes or shorts may cause microscopic, irreversible damage, resulting in floating or "stuck" pins.

That's why some pins of multi-purpose SNK chips like NEO-I0 may still function, but others may be dead. Some custom chips can be saved if they're mostly functioning: the dead pins can be cut off and replaced with discrete logic chips with a bit of courage.

RAM having unexplainable behavior are certainly internally damaged and need to be replaced. Multiple RAM chips may have been killed by a "long" voltage spike. RAM chips also tend to die one after the other on cabs which have their PSU's voltage set too high or drifting up with time.

The last part is the most usefull: Written XXXX Read YYZZ
The YYZZ represent upper and lower bytes - each one handled by different SRAM IC: YY is upper RAM, ZZ is lower RAM.

The value can help you to know which line/trace cause problem.
For example writting AAAA and reading AAA2 means the 4th data line of lower RAM causes problem.

Can be caused by bad components / continuity with the following: