A shot factory is the common name given to small utilities sometimes found in emulators, which gives the user the ability to see informations about sprites and individually hide them. 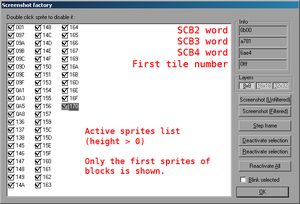 Shows a list of current active sprites (ones who have a non-zero size), their number, their 3 attribute words, and the tile number for the first tile.

Sprite blocks are grouped and can't be separated, only the driving sprite is shown in the list.

Beware: SCB word values is buggy, shows garbage when moving in the list with the arrow keys. 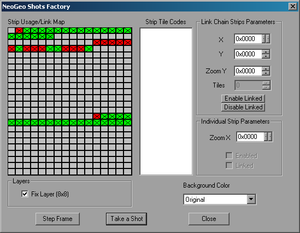 The most advanced shot factory.