Resistor array forming the video DAC on a MV1FZS.

The NeoGeo uses a discrete video Digital-to-Analog Converter made of resistors fed by two 74LS273 latches which store the color value from the palette RAM and 74LS06 inverters. This is controlled by either NEO-B1, NEO-GRC or NEO-GRZ.

Video DAC on a AES board. 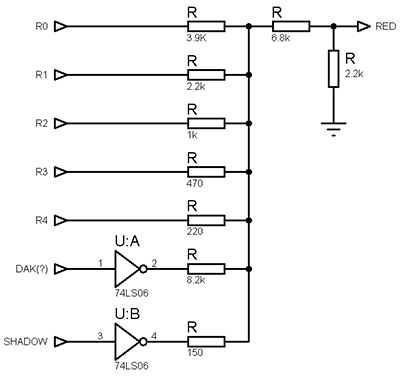 Each color component has its own set of 7 resistors. 6 of them are used for the actual color value (5 + 1 common bit). The last (SHADOW signal) is related to the REG_SHADOW and REG_NOSHADOW registers (system latch).

The output goes straight to the JAMMA connector as a 0~3.5V signal for high-impedance inputs (arcade monitors).