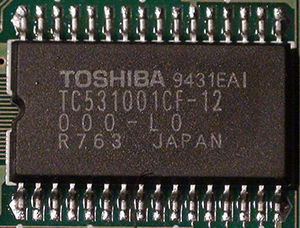 The L0 ROM is a 64KiB (sometimes 128KiB with A16 tied to ground) ROM chip found in every NeoGeo systems as a stand alone chip or integrated in another chip, which contains byte values used by LSPC to shrink sprites vertically.

The dump is called 000-lo.lo in system ROM sets.

The data is made of 256 tables of 256 bytes, each table corresponding to a vertical shrinking value for sprites.

For the first 256 lines (top half of a full sprite), the index in the table is the line number of the sprite currently being drawn (scanline - Y position).

Each byte entry in the table is used as 2 nibbles:

For the last 256 lines (bottom half of a full sprite), the index in the table is complemented: the table is read backwards. 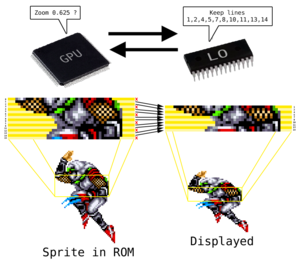 (Maybe place this part in the LSPC page ?)