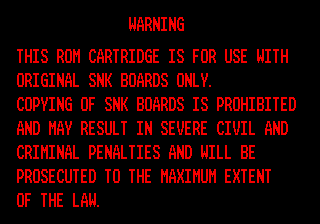 Warning screen as shown by Sengoku 3 when booting on MVS hardware with BIOS_MVS_FLAG set to 0 (AES mode).

Slot checking is a MVS security measure added in some games produced after 1998 due to the emergence of bootleg MVS boards. It displays a warning screen and locks the game up if some checks fail.

Someone who would want to bypass this check will typically search for the warning text string in the P ROM and references to it in the code. Such text can't be found because the checking routine uses a XORed version of the same text instead, certainly to confuse hackers.

If the game figures out it is being run for the first time on the system (thanks to backup RAM data), it forces a watchdog reset. If the system doesn't reset itself after a certain amount of time (due to the eventual absence of the watchdog circuit), the game displays the warning screen and locks up.

BIOS_MVS_FLAG ( $10FD82) is zero (BIOS in AES mode), and bit 7 of REG_STATUS_B is set (MVS hardware), the check fails. This causes bootleg boards using a copy of the AES system ROM or those that don't handle REG_STATUS_B reads to trigger the security.

Depending on the result of those checks, the value $8B55 (pass) or $9DBD (fail) is written to VRAM at $7FFF. This furthermore verifies that the board has full VRAM.

As seen in MAME's source ([neogeo.cpp]), a few games are known to do this check: