Difference between revisions of "VRAM"

The NeoGeo has 68KiB of VRAM split in two: a 64KiB lower zone, and 4KiB higher zone. Contrary to other systems, the VRAM does not contain actual graphics. It is used to store sprite attributes, the fix layer tile map and sprite lists for video rendering.

Access to VRAM is always done through 3 memory mapped registers handled by the LSPC, it does not appear in the 68k address space. Every VRAM address points to a 16-bit word, not a byte.

Due to the different access slots used internally for each of the VRAM zones, the address register must be set directly instead of relying on REG_VRAMMOD to cross zones ($0000~$7FFF to/from $8000~$FFFF). 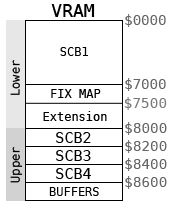 Even if VRAM can be modified even during active display, some timing restrictions have to be met in order to avoid skipping writes or reading incorrect data. This is because the LSPC can only provide a limited number of access slots for the CPU between the video rendering steps.

SNK imposed minimum waiting times to always be sure that no read or write operation to VRAM will fail:

Note that these restrictions only concern the VRAM access, and not the other LSPC registers.