Relatively recent multicart with a software menu. At least 2 versions of this cart exists.

Uses a bunch of uncommon Fujitsu SSOP70 55LV100S 128MB flash chips, which some say were salvaged from other arcade machines.

Another EPM3256 CPLD for the C, S and M ROMs. A smaller CPLD is used to replace NEO-ZMC.

Uses a daughterboard with 14 flash chips. Lots of unused footprints for additional chips. 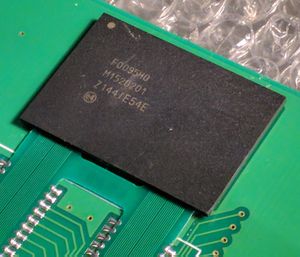 Version 2 has a design flaw compared to version 1 which causes instability espicially on the MV-4F where it will not really work at all. Comparing version 1 to version 2 PCB's it was noticed version 1 PROG boards (solder side) has pins PDWAIT1 and PDTACK bridged, this bridge is missing on version 2 PCBs.

Adding the bridge between these pins allows version 2 to work correctly on the MV-4F and probably makes it more stable on other MVS hardware also. See pictures below.

This version still uses salvaged memory chips from Excite pachislots and board very close to the version 2.

This version still uses salvaged memory chips from Excite pachislots, with strange adapter legs. Holes have been made in main boards so the memory chips can be resoldered.

Games have their v-blank interrupt code patched to allow going back to the game list menu by holding 1UP start down for 5 seconds. This button check however is quite flawed given it tests the entire byte of REG_STATUS_B and not bit 0 only. The result of this oversight by the coders means the game list menu will not reappear if running on AES hardware (via converter), if a memory card is present, or either 1UP select, 2UP start or 2UP select is also pressed.

Address 0x2FFFE0 (word) is used to communicate with the mcu for storage and retrieval of the game's software DIPs settings and the menu's current position.

Game selection is done through a set of 5 registers; 0x2FFFF0, 0x2FFFF2, 0x2FFFF4, 0x2FFFF6 and 0x2FFF00 (in that order). Each game is identified by a single word value (hex format) which is its position in the game list, KOF99 is 0x0015 for example. What is currently known about these registers is as follows;

Some notes about game swapping.

There are probably other game issues also.